A post overviewing the new features that appeared during the last month is published in the blog.

The Russian Federation got separate pages for each of its regions. The data is collected from a separate official data source, and it may include more recent data than those of the JHU. To compare the situation in different regions, visit the comparison page.

For the USA, the number of recovered cases is now available on the state level (starting from today).

The pages for the USA (since April 12th), Россия (since March 25th) and Украина (since April 8th) contain the number of tests performed on a country-level. For the USA, this data is detalised on a state level. 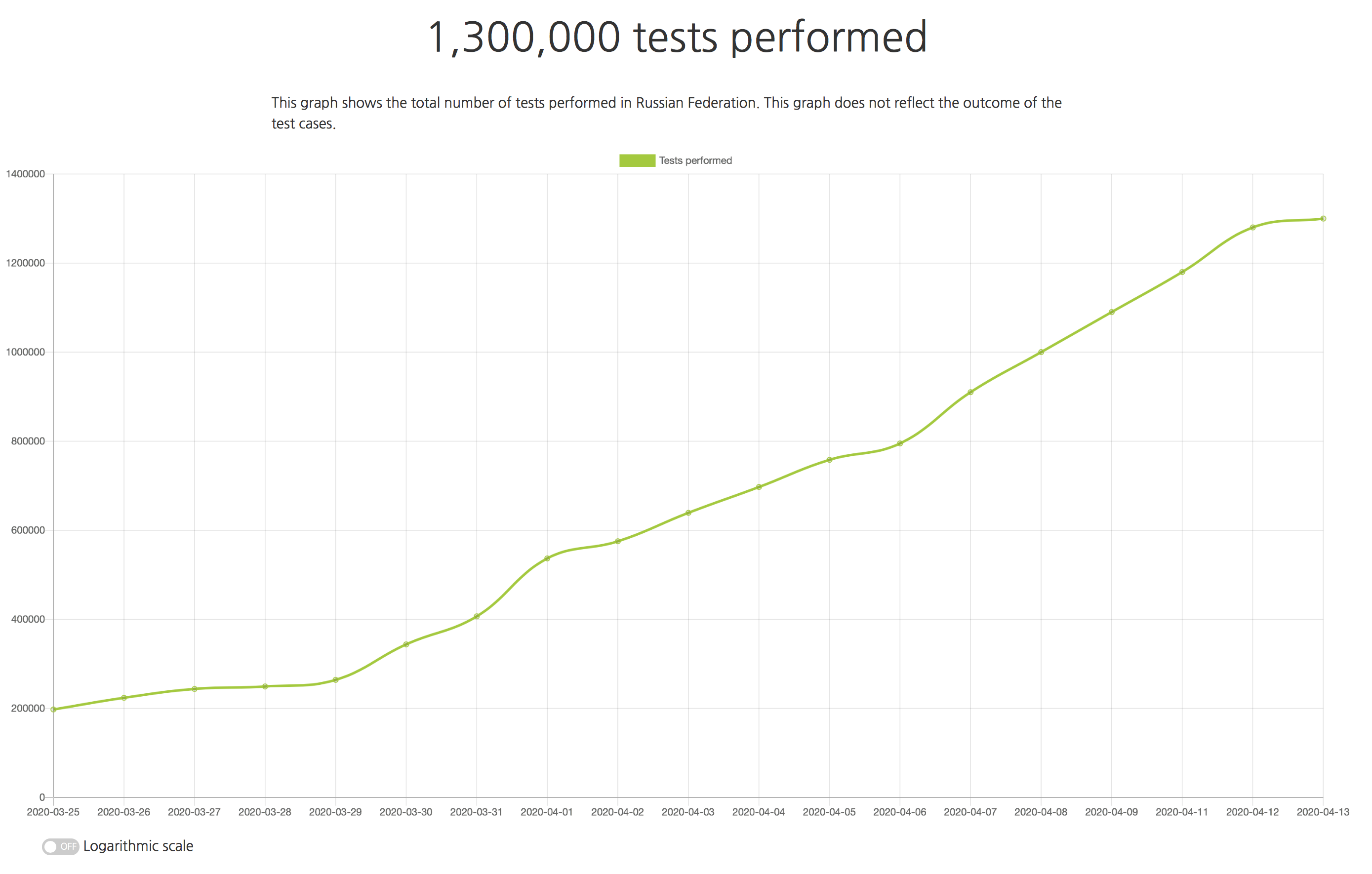 The red and green arrows displaying the trend in the change of the new confirmed daily cases is more granual now and includes five different indicator levels. Instead of taking the last two days only, the trend checker looks at the values during the recent seven days.

A new set of pages published on the site where you can compare the countries affected by coronavirus. For each country, there are a brief overview of the current numbers together with a couple of graphs: the absolute numbers of the confirmed, recovered, and fatal cases and the graph depicting the amount of new cases per day. Separate pages are dedicated to the Штаты США and Провинции Китая. 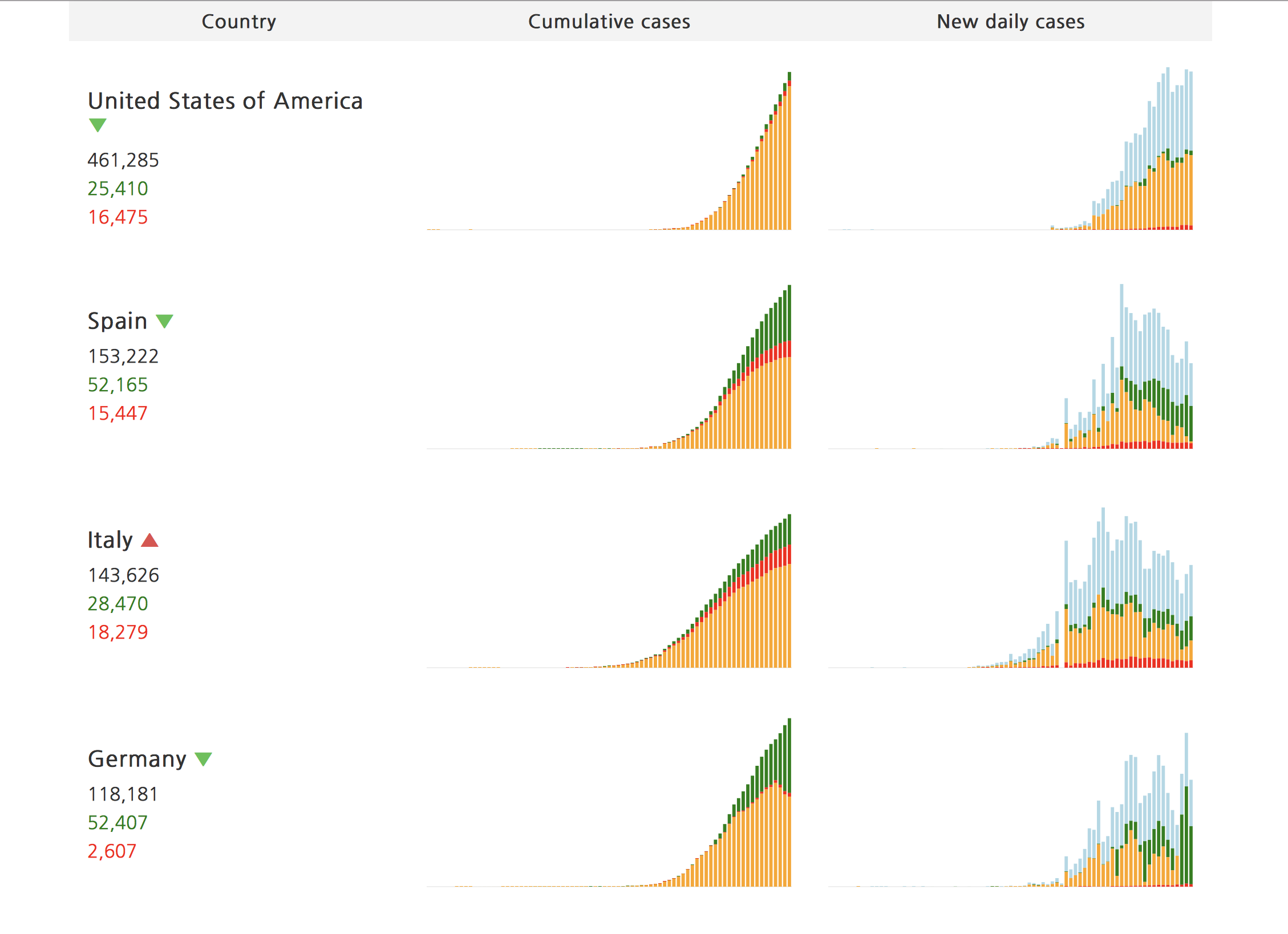 The per-million per capita values are replaces with per-thousand values. This change helps to avoid the weird-looking huge numbers for smaller countries where there are fewer than a million people. With this change, the numbers are displayed in the same scale as the crude country-level graphs.

Per capita (in fact, per-million) data are added at all levels of the site: World, continents, countries, and regions. These are the numbers of confirmed and fatal cases per each million of population (of the World, or country, etc.). For the countries that have fewer than a million of population, the same scale is used so that you can compare different countires without the need to re-normalise the numbers. The per capita values are also added to the top block of data on the corresponding pages, to the table representation (including the CSV and XLS exports), and as a separate graph on each page. Don’t forget that there is a separate set of pages to compare the countries based on per-capita values.

For example, per-million timeline in Italy:

Table data on all pages (World, continents, countries, and regions) are now available for downloading in the CSV and XLS formats.

The main numbers are equipped with the changes happend since yesterday. 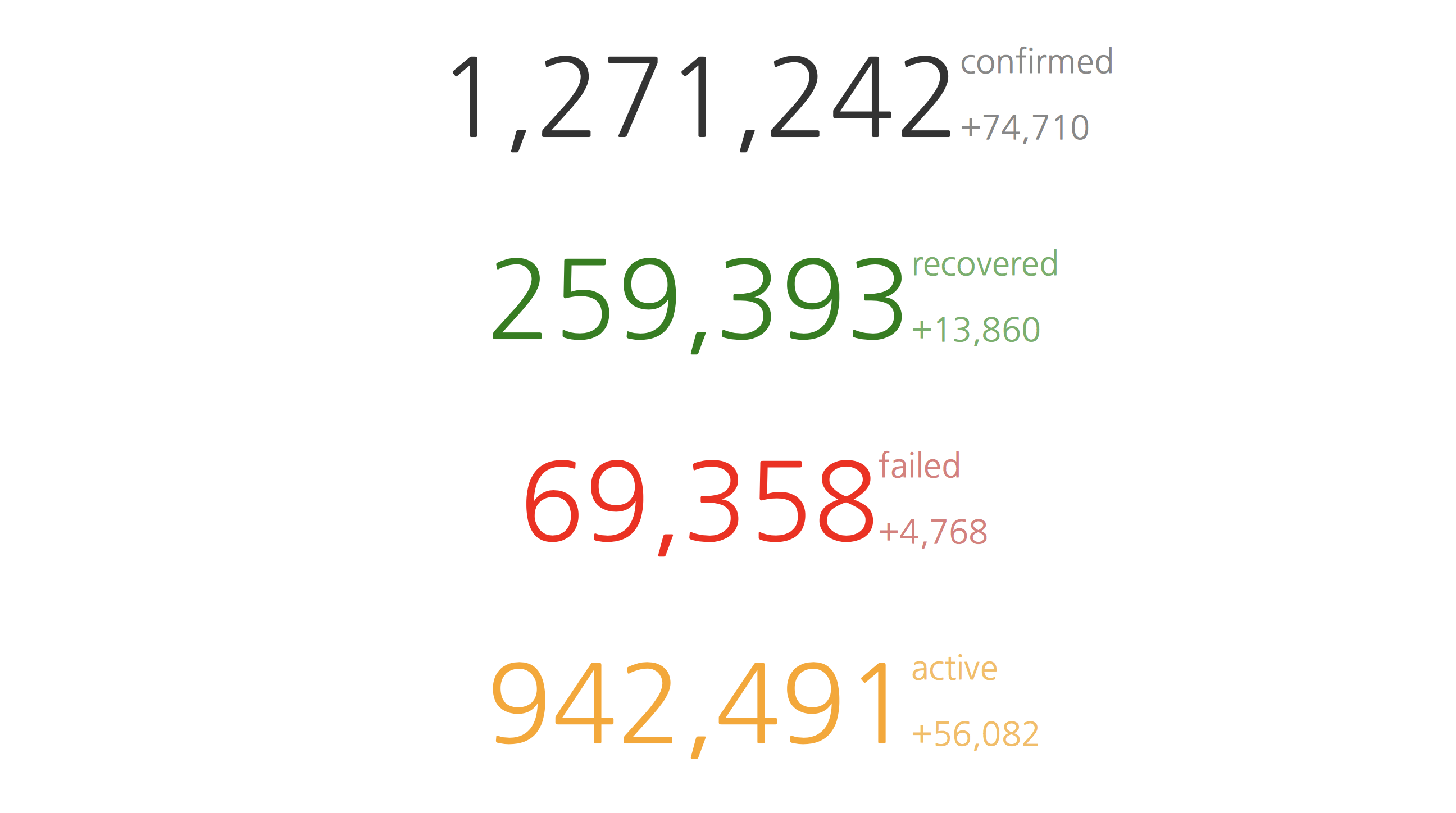 New feature on the site: an overview of the World on the map. Move the mouse over the country to see a brief COVID-19 statistics. Click on the country to get a more detailed overview on a country-level page. The colour indication follows the same principle as on the World overview page: the greener the colour, the fewer new cases have been registered in the given country during the last day comparing to the day before (that’s why China is greenish). 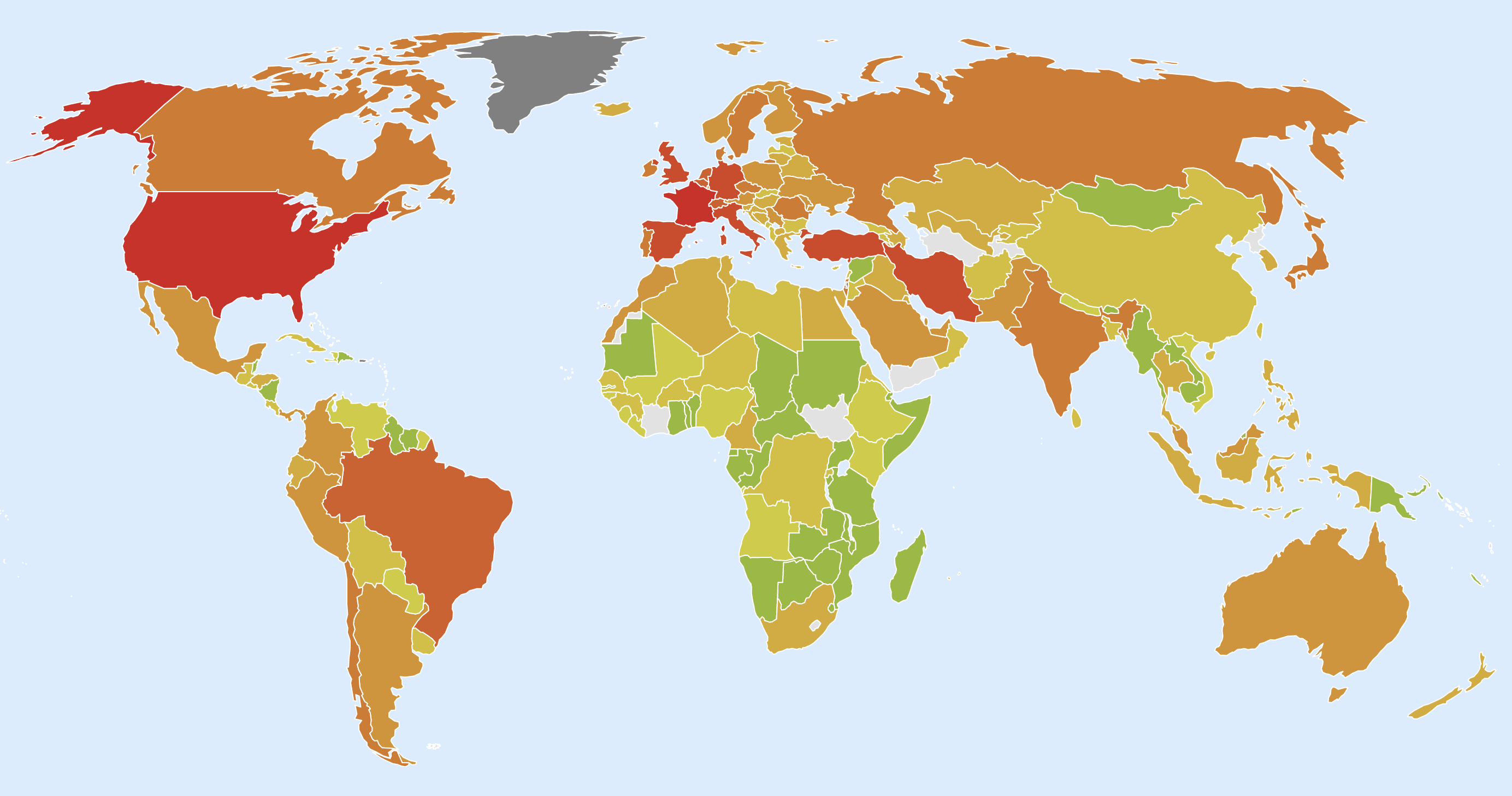 Per capita bar graphs are split into four groups with two graphs in each:

See, for example Crude rates for Spain and other country-level pages.

Mortality rates in the US: 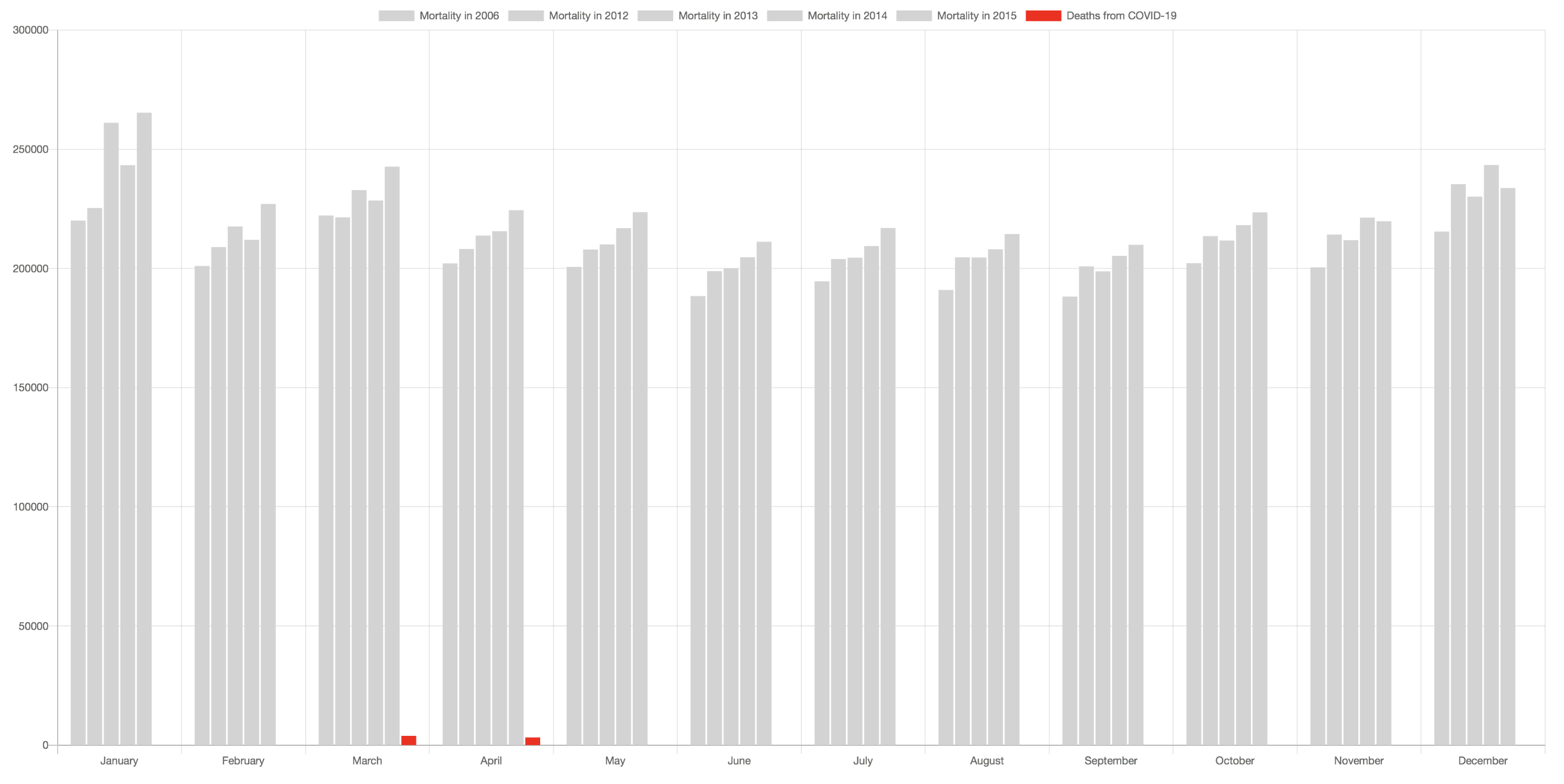 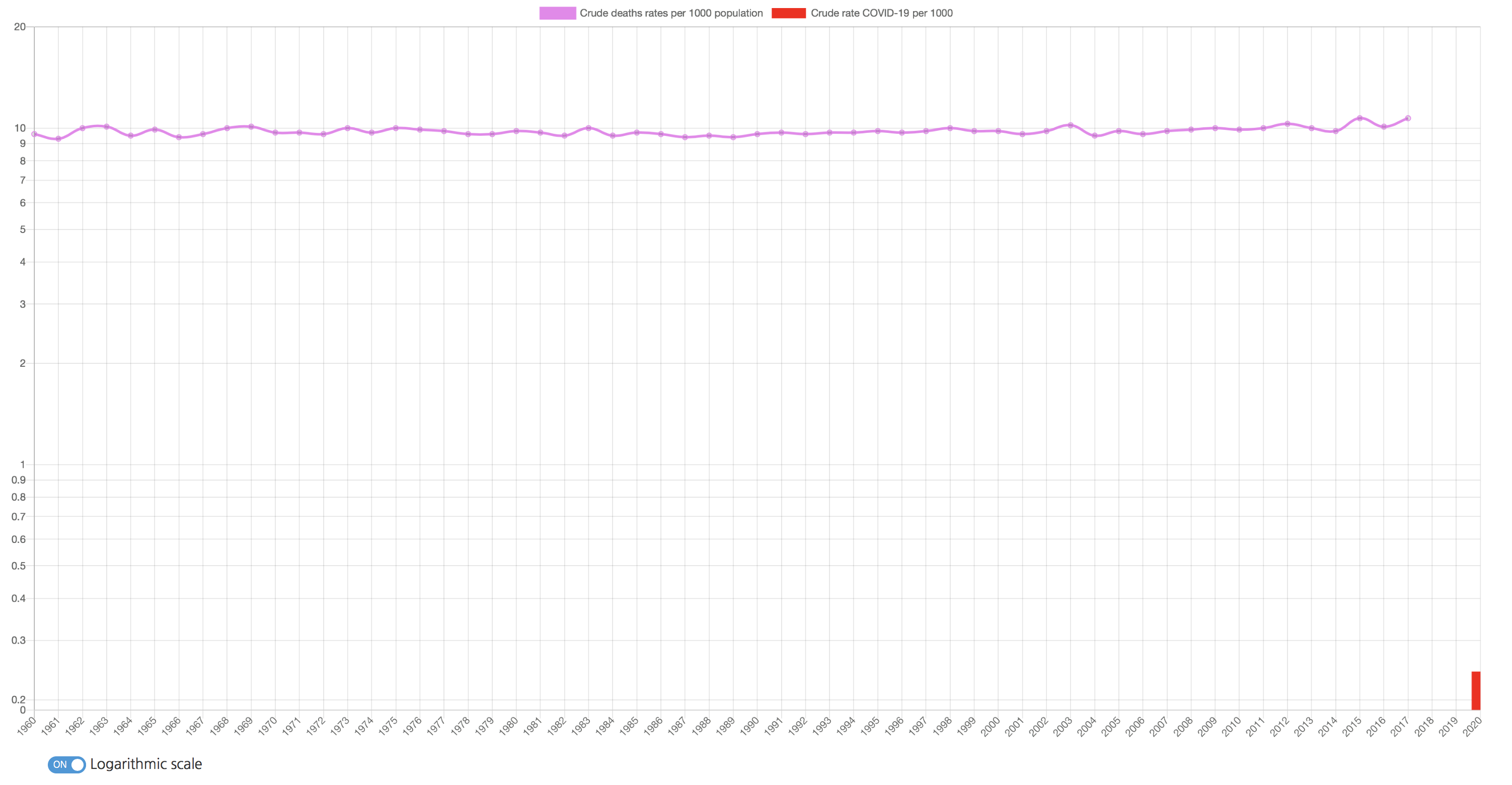 An article ‘Observing Coronavirus Pandemic with Raku’ covering some of the internals of the website published on perl.com.

The ’stock market arrows‘ have been added to the list of countries. You can now immediately see if the country is recovering. One of a few cases when the down arrow can be green and that‘s good. Also available for the US states and China provinces. 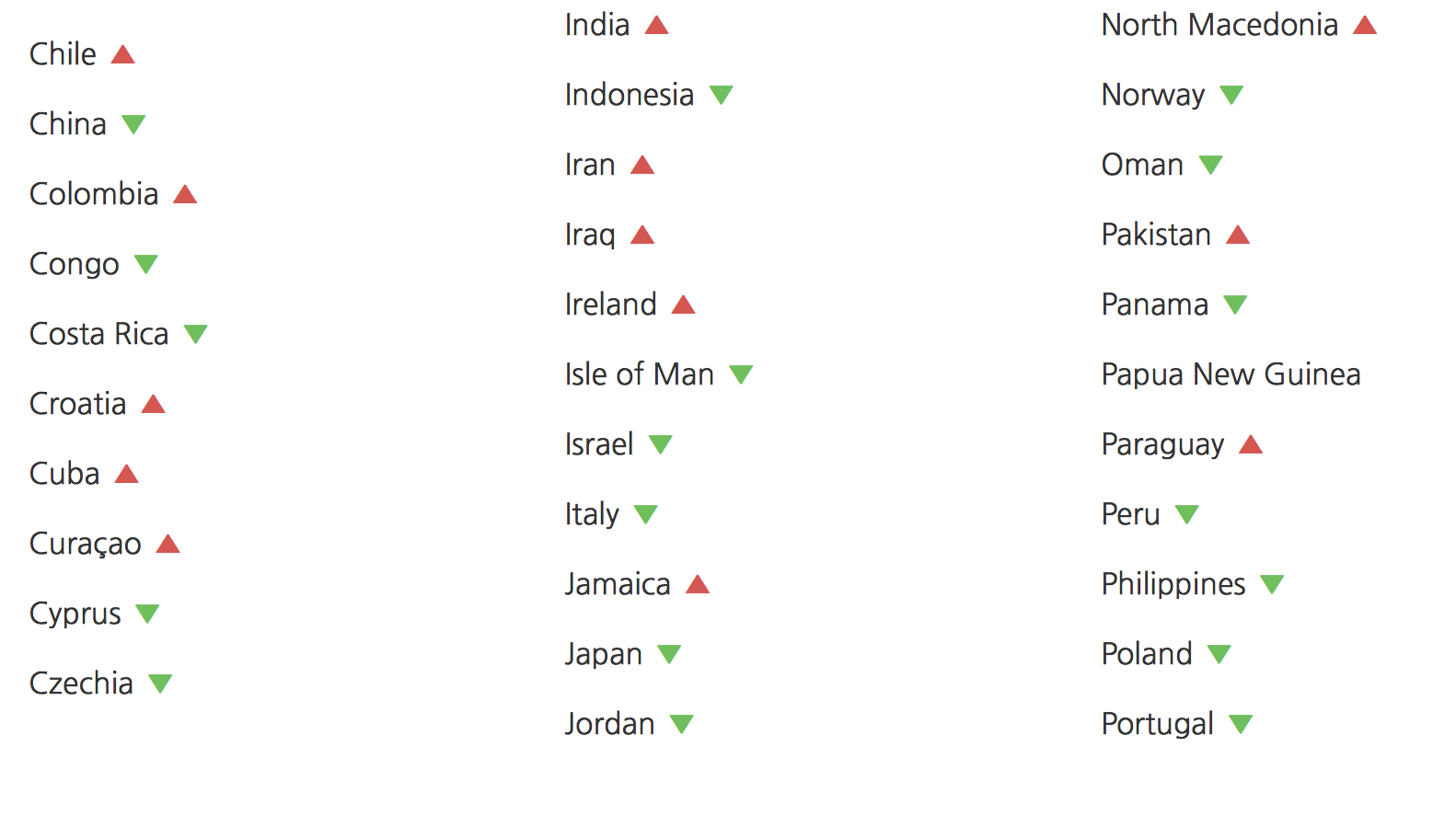 A blog post ‘On computing the number of recoveries’ published in the Tech blog.


The graph comparing per capita cases in different countries is more visible now in the site structure. Also, it now comes together with a co-graph sorted by failures per capita. 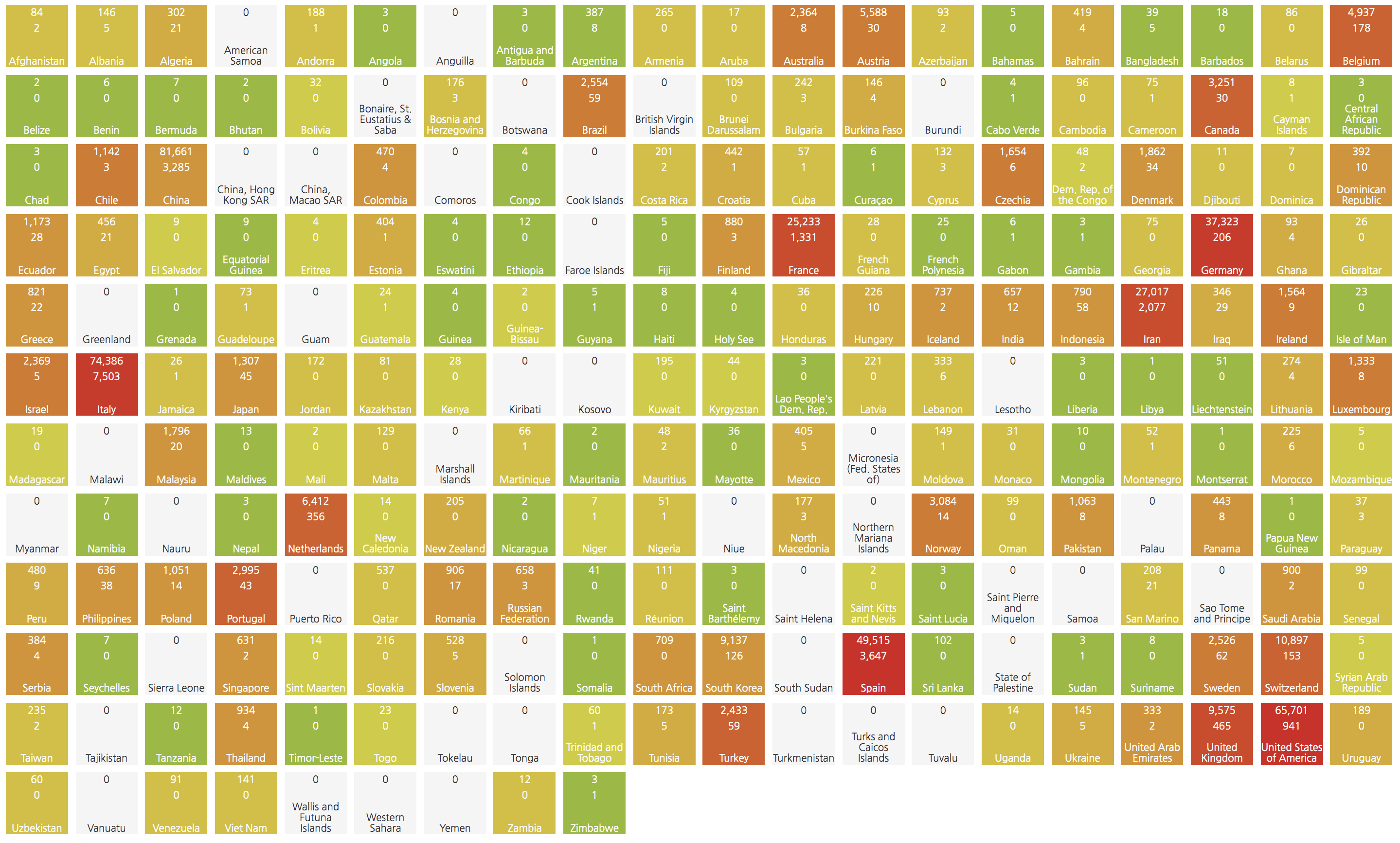 Using the logarithmic scale switches, you can see the details of all charts. For example, you can notice that China numbers outside of Hubei are growing, e.g., в Пекие. See also: Daily speed in China. 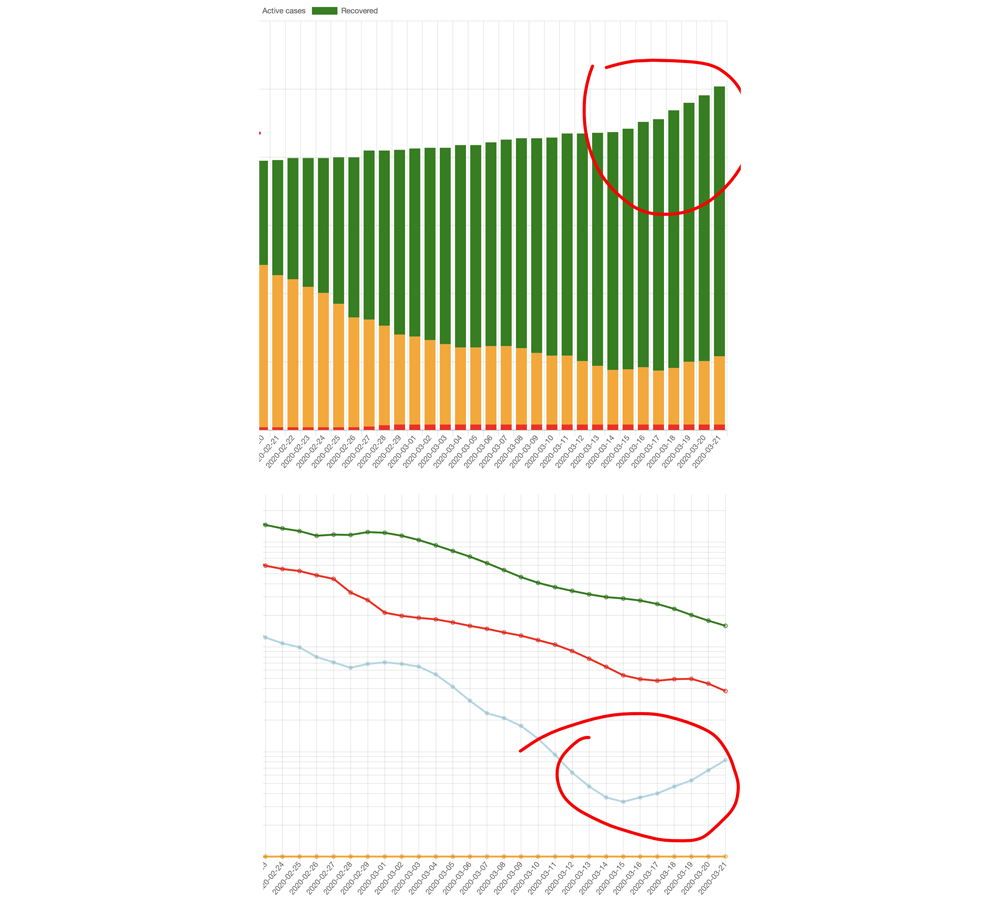 A new graph comparing the number of active cases per continent. Notably, Eurasia, being a single continent, suffers most.

And some new pages with the stats per continent. 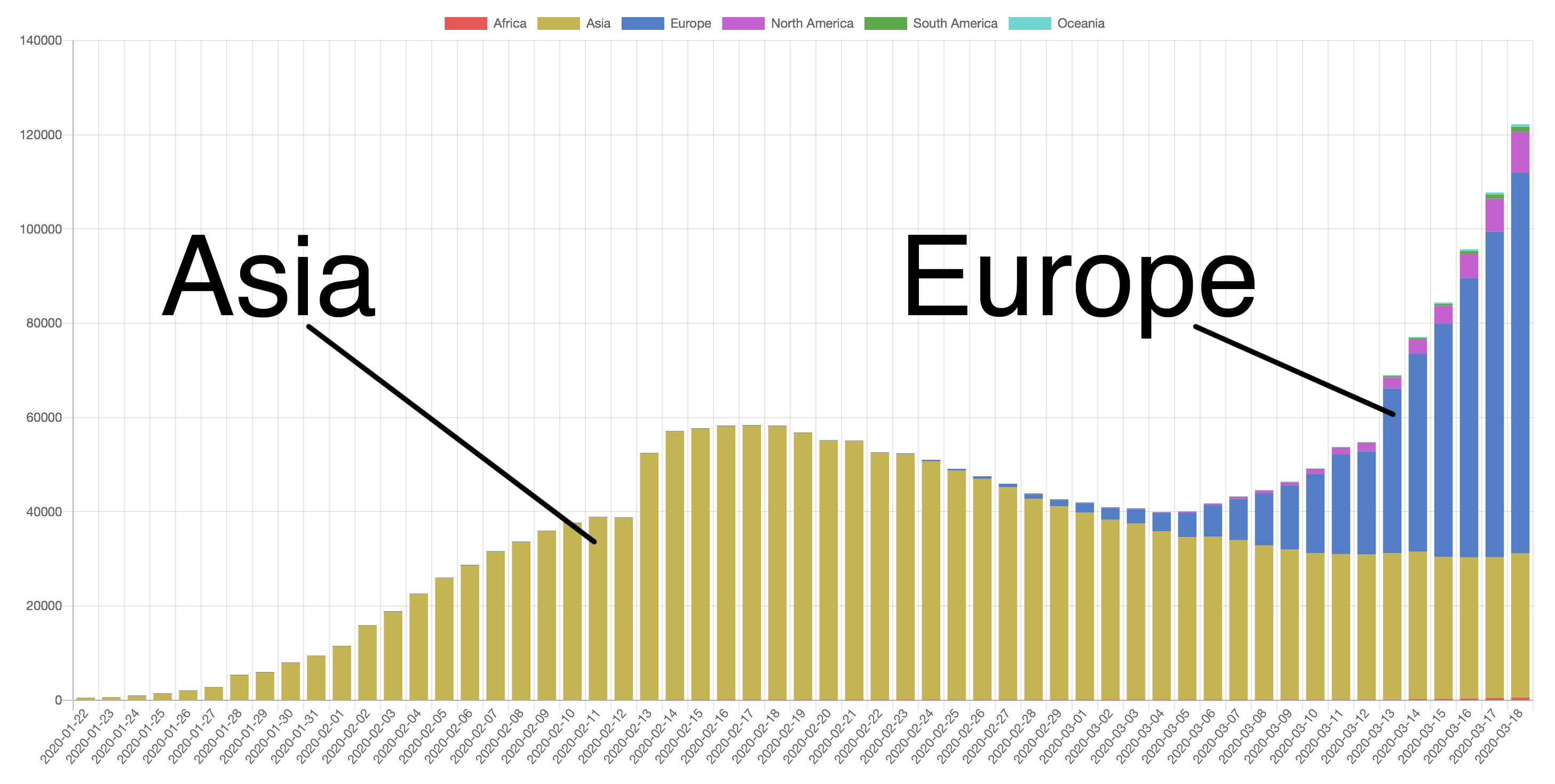 A couple of updates: 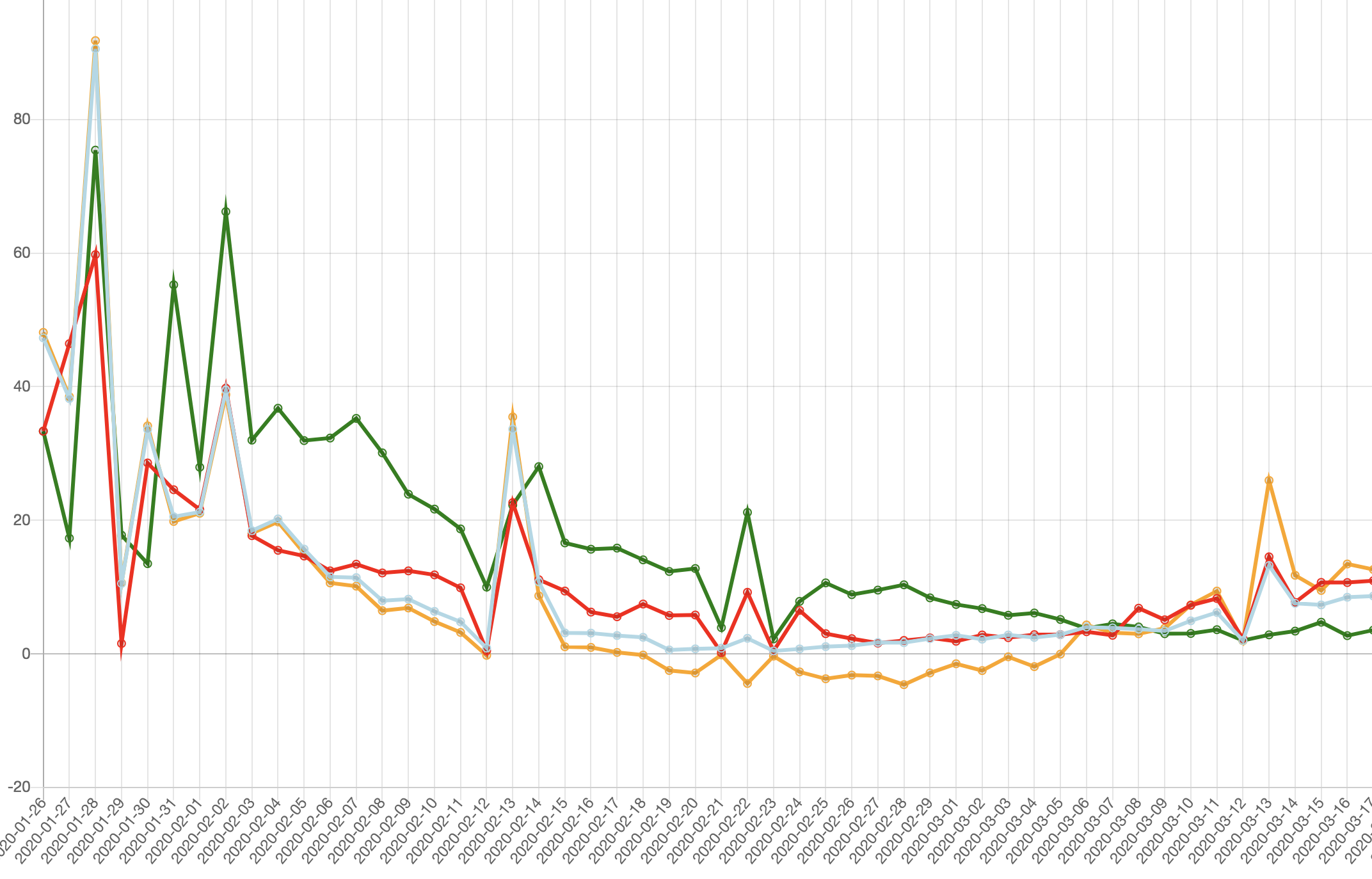 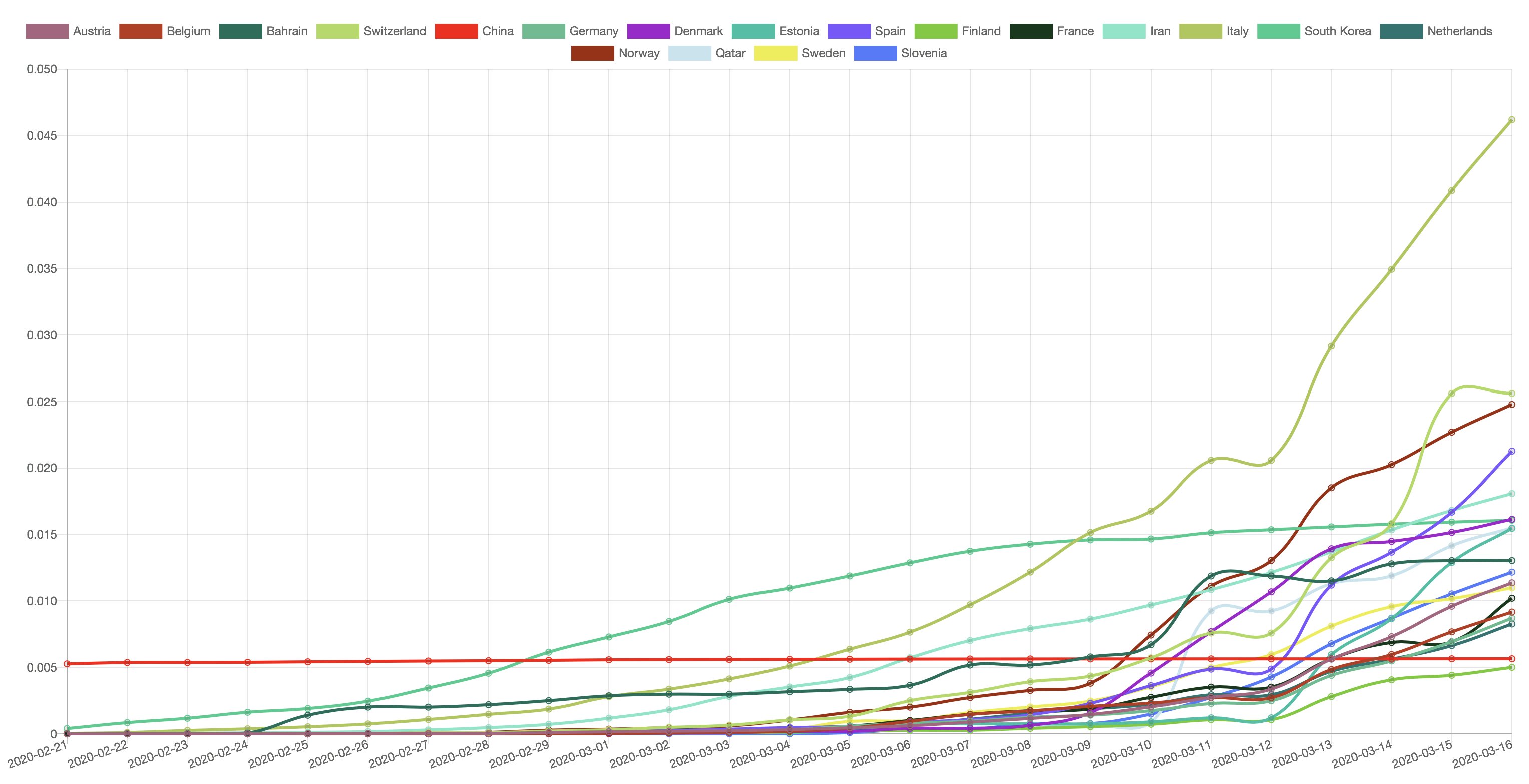 A new graph with the number of affected countries published.

You can also see there which country appeared on the given date in this Coronavirus story. Central African Republic, Equatorial Guinea, and Uzbekistan entered the chart yesterday with 1 confirmed cases in each. 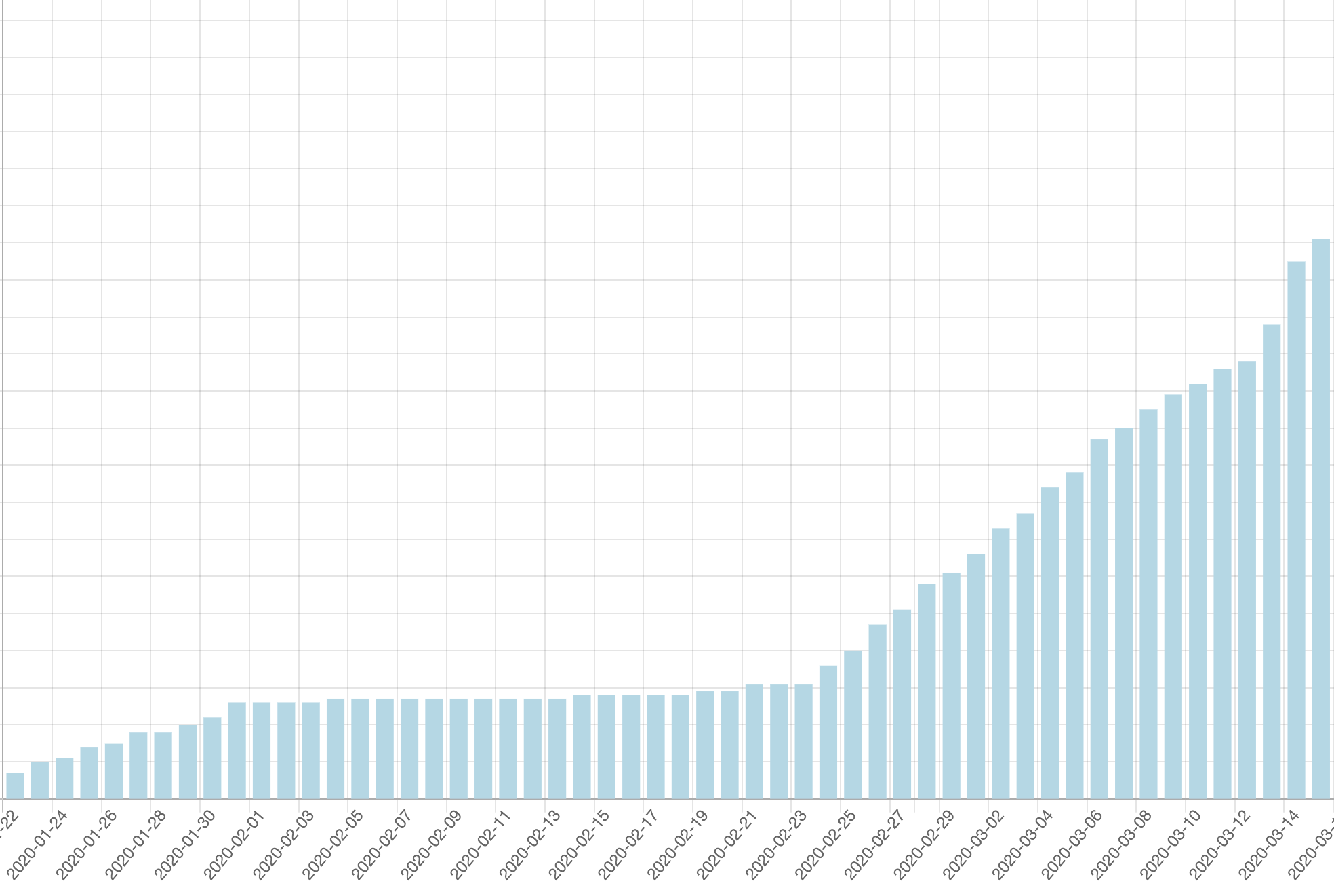